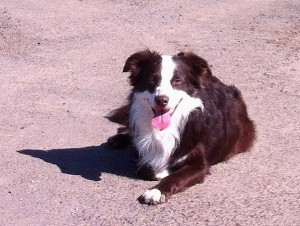 Dino has such keen herding instinct that he must be supervised or confined when not needed for work.  He seldom barks when herding and although he sometimes grips the stock on the hock or the neck, his mouth is very soft and the teeth don’ t connect.  He is either very excited about the stock or uninterested.  “Dino has worked goats, sheep and ducks (on leash).  He has a lot of intensity and we haven’t found HIS type of stock, yet.  Maybe he’s a cattle dog.”

Dino has never been exposed to baby livestock.  He generally gets along with other dogs although he does not cooperate with them in herding situations.

Dino readily learns immediate commands and is very responsive.  He will use his nose to track prey.

“He’s a friendly dog although he will announce strangers with a bark.”

Dino is a son of Slash V Han Solo

Solo is one Aussies living in Germany (although bred in the US) who has competed in the ASCA Stockdog finals (from 2007 till 2011) and has very often been placed or won titles:

Many of his offspring are successful trial dogs in Europe and/or work on farms as stockdogs. He’s a ASCA Hall of Fame Sire since 2011.