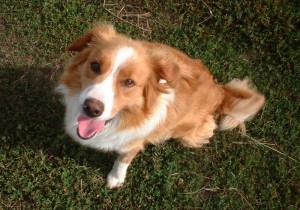 Living on a beef farm with a cow/calf operation gave Strider lots of opportunities to boss some stock around. He is content to stay home and guard the territory and work the stock only when needed. He uses a dominant stare to coerce the cattle and will walk right up to them to make them move. He commands respect. Strider has never gripped an animal to get them to move – either they were babies or his presence was enough. He naturally drives stock away from the handler.

He is gentle with babies and knows the difference between his own livestock and strangers. Strider is good at keeping his master and children safe from the stock. He announces the arrival of visitors and will kill snakes.

Strider barks treed and is highly concerned with the prey intruding on his territory. He is a good mouser and a willing fighter when his prey is vicious. Strider is a very dominant dog who needs a strong leader to work for. He listens to those he respects but he is not very easily discouraged. He has been aggressive when those who have not earned his respect have tried to command him.