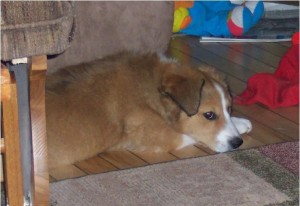 Lucky has been sleeping overnight in our room. I firmly believe that the first step in raising a good farmdog is bonding with the dog. When she learns that I am the boss and she is to trust what I say then we will be on our way. This dog is to be my friend, my protector, the enforcer of my rules and the guardian of my children. This is accomplished with an emotional connection.

She got to witness an awful calving the other day. We lost the heifer and the calf and it was horrible. She was mostly in the way the whole time, but she was safe and was getting some exposure. She has a good recall for her age–came here with it which makes my job so much easier. It is important for young farmcollies to have lots of exposure to the daily happenings. They will need to know what is normal so they can base sound decisions on that later in life.

We’ve also been carrying her on the ATV with us. She spent a good part of yesterday afternoon chasing leaves.

We need to give her more of her down time in the crate. I can see that since we have three dogs, at least one of them will need to be crate trained.

Oh, while walking to the barn two days ago she took off after two hens (we free range) I gave her the “aanck”, which she ignored. I was able to give her a swift and firm kick on the backside and that got her attention. She hasn’t chased them since, but I’m sure she will again when the opportunity presents itself.

April 25
We went to pick up four sheep. We walked out in the pasture to pick them out. Lucky took off after a lamb that fled. She started to give chase but came back when called! Good girl! Then I put her back on the leash and we practiced relaxing. She ate some poop.

I think an English shepherd’s desire to chase cats is two fold. Cats who run are fun to chase. AND cats don’t take direction well and English shepherds like to dominate. There is the usual prey drive problem and the fact that kitten fluff feels really good on puppy gums. There is also the problem that smart adult cats will not intimidate and may smack the dog making the dog despise cats. I’ve tried to keep Lucky out of the second situation up until now. However, she got swatted by Tigger a week or so ago. She yiped first but then retaliated by chasing Tigger across the road. (She has a better recall now.) She has considerable prey drive. 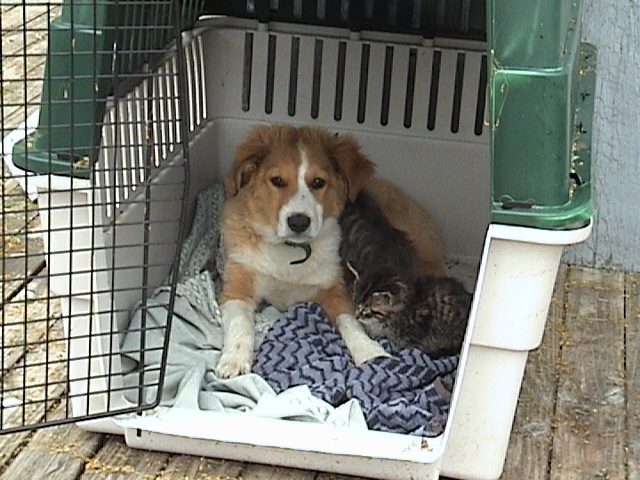 So, to get her socialized and bonded to our cats we got some new kittens (we lost all of our family cats on the road last summer anyway). These kittens are very young–still toddling and don’t run yet. This morning I let them in the kitchen with Lucky. Lucky was first very excited and tried to play with them. She wanted them to run, which they didn’t yet due to their age. I would give her the “aanck” and she would quit. I would pick up the kitten and hold near Lucky and talk gently to it. Then she upped the ante…tried to pick them up and throw them (not being mean, just trying to get them to play). I gave her the “aanck” and she quit. We continued this for five minutes or so. She started following them around and licking them for. I allowed her to lick, but did not allow teeth. Pretty soon she just went and laid down and observed them. I gave her gentle praise to let her know that she was doing the right thing but calm enough as not to excite her. After a while we gave the kittens some milk. I made Lucky watch them until they started to get full. Then I allowed her to eat with them. If she growled, I corrected her by pulling her off and cuddling her upside down. Now they are all sleeping from this mental exercise.

We will continue to repeat this over the next week or so.

About a week ago, Dan let Lucky tag along out to the pasture (330 Holstein heifers from 600-1500 lbs). He had Blondie along. Blondie is a wimp and is afraid of the cows in pasture (they are more curious and in-your-face than in barn situations). Lucky was taking her cues from Blondie and tucking her tail and staying by Dan’s feet. Dan came in and said she was timid. Hmmm. I didn’t expect that.

The next day I took her out with Shooter. Shooter is very protective of us when we’re in the pasture. He looks for a reason to run them off of us. I feel much safer when he’s around. Let’s just say it’s a good thing I had a leash in my pocket! The first couple of times that Shooter ran a heifer off of us Lucky sat there like ,”Wow that was COOL!” Then she started barking at them. Then she started lunging at them. Then she started chasing them off with Shooter. Then she started staring them down all by herself and taking off after them! All in a span of about 5 minutes. Great fun! I’m glad she had a good recall before we did this. I called her back and put her on the leash. She didn’t like that much, but too bad–I’m the boss and I don’t allow chasing for fun!

She’s doing well with her kittens. We have continued the supervised visitation. She now accepts them and loves them and licks them and is concerned when they cry. BUT she’s still a puppy and wants to play with them like they are puppies too. We will continue the supervised visitation for this reason. Lucky is a food hog and doesn’t have very good eating manners. When I go to feed the kittens, I make Lucky sit and then I feed her a treat then I give the kittens their food and make Lucky “get out”. I don’t think I’ll ever overcome her food possessiveness, but I think it goes right along with her inherent dominance. She will have to learn to play by my rules…at least while I’m watching.

She’s very good with strangers but barks appropriately when someone new approaches. I tell her good girl and call her back to me.

She and Ella continue to be best buds. Ella is 8 months old now and loves to pull hair. Lucky is not very physically sensitive and puts up with it well. I love how she approaches Ella, who is usually sitting. Lucky crawls up on her belly and rolls over and starts licking Ella. Occasionally she gets nibbly and I tell her “aanck”. Lucky has a very soft mouth, so it’s not usually a big deal. Ella has learned to tell her “aanck”, too. That’s pretty cute. She uses it with her brothers, too. 🙂

4 1/2 months old
Still loving her! Things have been quite hectic around here. We have had our 50 chicks for Lane’s egg business about 2 weeks. The dogs were with us from the beginning with those. Lucky rode with us to the post office to pick them up. She has a sensitive nose and she thought that smelly, peeping box was the oddest thing ever. She was very inquisitive. When we got home we put them in a bottomless wire cage on the grass. The dogs were all watching intently as Lane and Ethan dipped all their beaks and built a perch complex for them out of scrap wood. 🙂 Lucky could sit and watch them for hours. She definitely thinks they’re cute. I’m sure she’d think them tasty, too, but I like to have her thinking they’re cute also. She follows us out when we check on them about 5 times a day.

I think that the decision to let a dog help butcher poultry or eat dead poultry should be a case-by-case decision. In some dogs it will spark a desire to kill and eat them. Other dogs seem to pick up very quickly on what is already dead and what is alive and under their care.

I made a split-second decision to let Lucky eat it. I suppose I based this on her looking at the chicks intently and thinking they were cute. When Meg (former female dog) would look at chicks, she would salivate. I know she wasn’t thinking “cute”. 🙂 Lucky would still like to play with them, but her intent toward them seems nurturing.

So anyway… I let her eat the dead one. Took her a few minutes. About half an hour later we went out again and I let a live poult run around on the floor with only Lucky in the room. (I let it go where she didn’t see me put it down–so she just “happened” to find it.) Lucky saw it and lunged. I “aancked” loudly. At the same moment I “aancked”, I saw a light bulb go on as she realized that this one was alive. She began walking along side it and licking it and laid down next to it and nuzzled it! Good girl! I have done this same exercise a couple other times since them.

of Suring, Wisconsin and bred by Linda Mitchell of Sugarcreek English Shepherds.

For more information on farmdogs