The Rules and Pack Bonding

The most important thing you can do with your new pup is to bond him to your family members, as almost everything else he does as a working dog in this environment is dependent upon this love for and sense of order about the pack.

Loving a new puppy is one of the greatest joys and happiest times of dog ownership, and developing a strong loving bond between your dog and family is the basis for future happiness in your home, as well as a working farm partner that will help and protect you in many endeavors.  It is important that you form these bonds while at the same time developing the idea in the pup’s mind that you and every member of your family are above the pup in pack rank.  Teaching him limits, and rules early on helps to get it into his mind who is the boss.  These rules can be designed to give the idea that your kids are above him in pack rank.  If you allow both your kids and the dog on your furniture with your permission, then the dog may see himself as their equal or superior.  If you allow your kids on furniture but not the dog, then the dog is more apt to see himself as inferior to them.  Dogs feet don’t belong on people or furniture is a handy rule to teach particularly if you intend for your dog to help you work in actual farm situations.  Grooming him daily helps to build a loving bond that reinforces the idea that you are in control of him and not the other way around.

Secondarily, your dog needs to bond to the other livestock in your situation.  When your dog sees your livestock as part of the pack he will be less apt to kill it or herd it inappropriately, causing problems.  This bonding is accomplished by taking the dog along with you as you go about your daily chores.

When pups do get thumped or stepped on, I’ve found it best not to make too big a deal, too. Too much cooing or soothing can have the same effect on a pup as it does on a kid, who then cries harder because he has the impression the dent he just got is worse that it really is. I’ll take a breath and ask “Are you ok?” in a calm voice whether the victim is human or canine, lol, rather than doing the “OMG, You poor baby!” routine. If there’s no discernable damage, we all go back about our business as though nothing happened.

Returning to “work” after a pup’s been thumped should be a matter-of-fact affair. But trying not to be overly protective while at the same time not exposing him to MORE thumps can be a challenge, it’s a lot like the fine line between being overprotective and letting a toddler explore/experiment on the playground while still staying close enough to catch him should the need arise.

The way to react to the ewe who takes a run at a pup or stamps/tosses her head is to back her off, using just as much aggression and force as you’d like to see your pup use someday and no more. These dogs are like little sponges soaking up information and they watch and process EVERYTHING.   Keep in mind he is learning the rules of engagement by watching you, so when you model behaviors for him/”be the dog”, make sure you’re being a GOOD dog, lol. The other thing that backing/driving boisterous or aggressive stock out of his proximity as he watches accomplishes, is it lets pup know he is a welcomed member of your pack and that he has a leader/alpha that is willing to protect him. It won’t be long before he’s big and confident enough to return the favor 🙂
-Tish Toren

Here are farmcollie pups being introduced to the routines of the farm which they will later be expected to enforce: 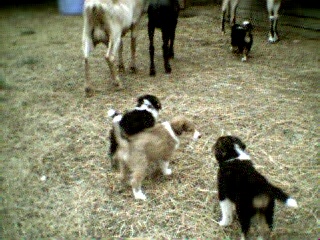 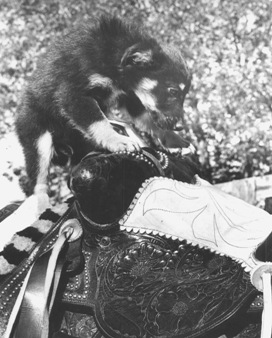 This is the KEY – the ES/farmcollie working character is based on bonding. Herding is simply defined as the ability to move stock. When the AWFA board evaluates a dog, they look at the accomplishment of an end result. They pay less attention to *how* that task gets done. So, herding can be the kind in a round pen with six sheep and the dog learning “away to me” or “come by”. It can also be the kind where the dog picks up a slice of hay and gets an individual to follow. Many of these dogs are thinkers and will find a way to get the task accomplished.

On introducing pup to livestock:

Some of my pups have gone to homes with small flocks of sheep or a couple goats. How should the people introduce the pup to the livestock? The owners don’t think the sheep/goats are “safe” for a young pup but as the pups are getting older (14 weeks) they feel they should be doing something other than the pup watching thru the fence. They don’t have an adult dog to provide a measure of safety. I am encouraging the owners to sign up for the list. thanks,

Re: introducing pup to livestock:

We had been bringing the pup along with us to do “chores” every morning, and he loved it. But last week he got in between a ewe and her grain (he was supposed to be safely in the hay room while we fed, but the door is tricky in the cold weather and he snuck out). She walloped him — he is fine but he did give out a yelp and we don’t want him to be scared of them, so we haven’t brought him along since. We are not sure if this is the right thing or not? Any and all advice would be appreciated.

You’ve gotten good advice already, but thought I might add a few things 🙂 When pups are tiny, I’ll bring them into the pens/pastures with me provided the stock is gentle enough or situation is quiet enough I don’t have to worry about them going after the pup. Having a line on him so you can “reel him in” quick need be is a good idea. I’ll scoop a little pup up and tuck him under my arm if he’s looking scared of one of the big bad sheep, or if looks like he might get thumped or run over. Not a bad thing to let the pup know you’ve got his back, but don’t overdo it… 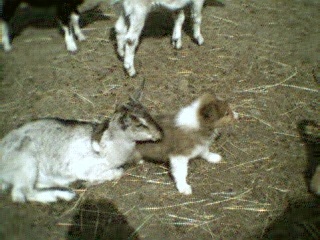 If he’s not in any real danger, it might be best to let him see nothing’s going to eat him, lol. If it’s possible to have him on the other side of the fence or panel so he can watch while you feed the pushy critters rather than being secured out of sight it would be good, it helps when pup is allowed to observe all the normal working of the farm. Later on, when something’s NOT normal (like the sheep push out the open gate and need to be put back, or you’ve been tackled with your grain bucket or something, ouch!)) he’ll know this is not part of the normal routine and will try to help and/or protect you.

In this picture, the pup’s tail is over the kid’s back!

Most importantly, ENJOY your pup! Training is FUN!