Introducing New Livestock to the Farmdogs

One of the most difficult things to do with farmcollie dogs on an existing farm is to introduce new livestock and have them accepted by the dogs as pack members.  In order for this to be a successful operation, your dog must first acknowledge you as the pack leader and rule maker for the pack.. 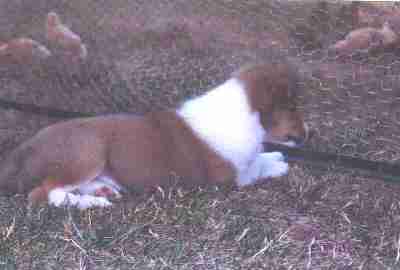 I’ll be bringing home one or two bummer lambs in the next day or so. Any suggestions on introducing it (them) to the dogs to maximize the dogs’ guardian instincts? There’s lots of livestock around us, but these are firsts for the dogs. Thanks in advance!

When we bring new animals home we make sure to introduce them to the dogs as soon as we get out of the car–it’s the first thing we do. If it is a small animal (a baby of some sort) we hold it and lean down so the dogs can sniff it all over. I usually pet the animal and keep telling the dogs, “Gentle,” and talking quietly to the animal and the dogs the whole time. It gives them the idea that this animal is MINE. If they start to get too excited or snap or anything, I immediately pull the animal out of reach and rebuke them sharply. When they settle down, I lean down with the animal and start over.

When Jacob was younger, I sometimes took 15-20 minutes at this. Now, it takes just a few minutes and he’s usually adopting the animal within a minute or less. The other dogs follow his lead. I usually know when Jacob has taken ownership when he starts to warn the other dogs off by growling at them. He seems to be telling them that this animal is HIS and they better behave and not take liberties.

Most of the time, baby animals are not difficult (except poultry–that takes a little more effort). The important thing is to give the dogs plenty of opportunity to bond with them without giving them any opportunities to injure them, either accidentally or on purpose. The first few encounters are really important, and the dogs need to realize that they are your partners in caring for this animal, and not that the animal is a competitor for your attention.

Since your dogs have not really been exposed to livestock much, it may take several sessions of introduction to start them thinking in the right direction. I wouldn’t give them any opportunities to be with the lambs alone until you are sure they’ve got the idea. Be sure to include them in caring for the sheep as much as possible, though, especially at feeding time. Don’t be afraid to whack them good if they try to take any nips and don’t ever allow them to chase or harass the lambs, even if it just looks like dog play. If you have to, you can take them into the lamb pen for short periods every day and make them lie down next to the babies, as close as you can get them. Eventually, the excitement will wear off and they will get the idea that they must be quiet and controlled around the sheep. Given the genetic background of your dogs, I don’t think you’ll have much trouble.

Most herding wisdom tells you not to discourage your dogs from moving the stock around, and to avoid this by confining the dogs, not by rebuking them. However, that is usually aimed at dogs that are solely herding dogs (ie. border collies). With a dog that is both guardian and herder, it is important that they never get in the habit of moving the stock unless there is a reason to do so. If they view the stock only as something to move, they will never really bond with them as a guardian. I try to prevent the issue by not putting them in situations where they might be tempted to move the animals around until they are settled enough in our routine that they know what is expected–after that we rarely have a problem. However, should the situation happen in spite of precautions, I don’t hesitate to tell the dogs “NO” very emphatically. So far, it has not curbed their ability or desire to herd when the need presents itself. Our current pup, Molly, has had a strong desire to intimidate and move the animals since she was tiny. I never allowed her to bark and run at the goats, and sometimes had to whack her rear and make her leave the pen when she wouldn’t comply. In spite of this, she was herding the babies to the bucket feeders at feeding time before she was four months old–but ONLY when she was told. Most importantly, she also settled down enough to bond with the goats, and now cleans them up and “babies” them just like her dad does. Somehow, I think these multi-purpose workers have the ability to differentiate in a way that perhaps the single purpose dogs cannot. Of course, you may discourage them from herding permanently if you end up having to rebuke them too often, so it is important to avoid the situation if at all possible.

Hope that gives you some helpful ideas.

We just had twin kids yesterday. We had a little buck and a doe. They are so cute. We are expecting two does to kid probably next month and 3 litters of puppies next month as well. It is a busy month and year for us.

Now to the question of introducing dogs to lambs. Have the lambs in a separate pen where the dogs can get used to the lambs and the lambs to the dogs. This should help with their guardian instincts.

We happened to have twin orphan goats in the house when we brought in our male Pyr puppy. He took to guarding them in a hurry. He came off a sheep farm. So the transition (sp) for him wasn’t that hard.

I hope that this helps.

“Be sure the lambs are vaccinated for overeating disease.”

Technically, it’s called enterotoxemia, and the vaccine is the toxoid for enterotoxemia type C and D. You can also get it in a preparation that includes tetanus (a good idea) that is called CDT. It should be available at any feed store that has supplies for goats or sheep.

Well, Caesar and Brutus the lambs are here (they were born on the Ides of March); the dogs are acting very differently. Beau is VERY excited, too excited, I think. Dovey keeps looking at them and skirts around. She sniffed them but seems unsure about it all. Perhaps Beau is giving her a message I’m not reading (like, “they’re MINE!”?). So we followed Sandra’s advice and are keeping it controlled and hopefully Beau will settle down. He’s licked them a lot around the ears and bottom. But too excited. I’ll no doubt be asking for more advice over the next day or two-

Beau’s behavior sounds very promising. It’s normal for him to be really excited at this stage–it’s all new to him and he’s pretty young. It sounds like you’re handling it just right. If you get a chance, it might be helpful to give Dovey a chance to bond with them when Beau isn’t around. We did that for Ellen when the new baby goats started to arrive and got her hooked. She was so determined after that, Jacob finally grudgingly let her participate in caring for them. We had the same experience with Lucy last year. Molly was pushy enough that she didn’t need any help. With the more submissive dogs though, once the alpha dog has intimidated them, it may take 10 or 15 minutes of encouragement in the alpha dog’s absence to overcome their hesitancy.

Yes, Beau is so excited but it’s getting better today. He keeps looking at me like, “What took you so long to get these for me?!” He wants to lick them all the time. We have them in an add-on to the house for now and every time Beau heard them bleat or get up last night he started whining and came to wake me up. Right now he’s lying in front of them while they sleep. I think he has those protective instincts!

We did let Dovey have some time alone with them last night and she was tail-wagging and sniffing too. She also did the “let’s play” posture and barked at them. I think you’re right about her hesitancy being related to Beau being top dog.

Thanks again for the advice,

I gather that ES have a very strong tendency to adopt livestock into their “pack”, and a strong protective instinct for their pack to match. Thus livestock become something to protect rather than something to just tolerate or worse “prey” (like the possum). Is this right?

This certainly describes what we have experienced with our dogs. Unfortunately, poultry isn’t as readily adopted as other stock (I’m not sure why) and for us it has taken some concentrated effort to accomplish that. Maybe with other dogs it would be easier, but I don’t know. It seems as though most dogs view poultry as prey. The ES (or at least some ES) and similar dogs (some collies for example) are more likely to be able to change their perspective on this, while dogs without that guardian instinct will simply learn to leave the hens alone and could care less about them beyond guarding the territory where they are.

Saying that the stock becomes something more than just a thing to be tolerated describes it well. Elaine mentioned the story about Jacob and the mouse–the funny thing about that was his attitude. He acted like that mouse was his baby, wagging his tail and nosing it and looking for all the world like he was smiling at the thing! He acted like he really liked it. In contrast, rodents out in the field don’t get such royal treatment. One gulp about does it.

We purchased a calf a few years ago that arrived at the farm very sick. Jacob immediately recognized that something was wrong and set himself to guard that baby. He was never far away from it for the three days that it lived, cleaning it up (ever seen a dog try to clean up a scouring calf? Yuck!), guarding it from the other dogs, etc. When the calf died, he became very depressed and literally drooped. It took him several days to become reconciled to the fact that the calf was dead so that we could dispose of it. This kind of behavior is unmistakably guardian instinct at work! It is as if the stock literally become part of the dog’s family and there is often an obvious emotional attachment.

I have only tried it with baby birds. It may be possible with a mature flock, but it would probably be a lot more difficult. Theoretically, once the babies are part of the pack, they will remain so even when they grow up. The “nurturing” attitude of the dogs definitely changes when the stock/poultry are no longer babies and there is more of a dominance attitude, just like there would be for a puppy in the pack who grows up. This dominance attitude must be channeled to ensure the safety of the stock, since a dominance struggle can easily injure small stock, especially poultry. All this to say that there is still often a need to enforce the “leave it alone” rule, even when the poultry is accepted as pack.

Most importantly, ENJOY your pup!