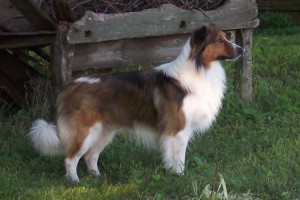 Whiskey is a gem of an all-round farmdog.  He seeks to maintain order and routine, alerting or acting upon all strange situations.  He understands what people want and has taken very little training.  He brings the horses up for grain and puts them in their own stall and puts the chickens in the barn at night.  He only herds when needed and has been trained to use his bark rather than his bite to herd the horses.  When he does grip, he targets the heel, hock, and tail.  He will also control the horses with an icy stare, if they don’t comply he will get tougher with them.  He sometimes crouches while herding.  He excels at herding gently unless force is necessary.

He matured early and began pitching-in with chores when he was 12-16 weeks old.  He will put away escapees without direction.  Whiskey has a lot of guardian nature with the stock.  He considers all little creatures to be his and doesn’t care if they are newly introduced or not.  He is highly protective of his chicks, defending them from both owls and hawks.  He also took a hit from a naughty rooster who was trying to flog a 5-year-old boy.

He trees prey and is good at pest control.  He and his friend the Norwich Terrier spend a lot of time searching for voles and mice in the field.  He is never aggressive but is cautious of strangers until introduced to them.