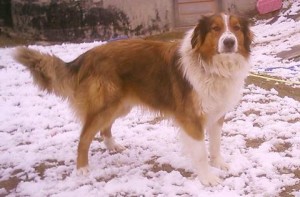 Rooster has tremendous herding and guarding skills.  He is the iron fist in a velvet glove.  He uses just the right amount of force to accomplish the task. He is patient with the lambs but will enforce on any adult that confronts him. He once grabbed the ram by the nose when his owner was threatened.  Rooster is very concerned with keeping order and will see that the farm rules are followed and that the stock is in its proper place.  He uses dominance behaviors to control the stock and works up close with very little bark.  When he nips it is usually on the heels or hock.

He is highly interested in the babies and cares for the new lambs.  He once located a lamb out in the pasture, helped with doctoring it, defended it from the other dogs and mourned when the lamb died. Rooster recognizes his own stock.  He is very territorial.  He stays on his territory, chases away predatory birds, patrols the perimeter and strongly resents the intrusion of strange dogs.  Rooster is very protective of his owner and has responded with extreme aggression when he believed she was threatened.

He will attempt to kill snakes.  He has had no opportunity to tree prey but has assisted in digging out and killing woodchucks.  He routinely hunts vermin and eliminates them.  He is a very soft dog who corrects easily, but does not get discouraged.  He generally gets along with other dogs and is especially tolerant of children.  He is reserved and somewhat suspicious of strangers until they have been accepted.  Then he solicits petting and attention