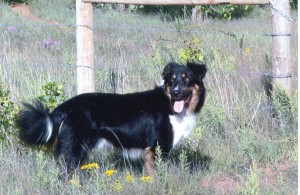 Solomon is a great all-round farm and family dog.  He has a small farm consisting of a few cows, a horse, some chickens, and geese.  He has not had any training, but when he was about 4 months old he began going to bring the cows up when they were called.  When herding, he is concerned about keeping the group moving along together.  He will sometimes nip the stock on the neck or nose.  He works close and uses his bark to instruct the animals along with body positioning.

Solomon adopted a calf that was born.  He has chased off hawks and owls that have been after the fowl and has killed opossums.  He is good and staying home, resents the intrusion of strange dogs on his territory, regularly patrols the borders, and announces visitors.

Solomon is adept at killing varmints.  He was encouraged to kill his first opossum and all varmints are fair game thereafter.  He is a confident dog that should be able to take on whatever predator arises.  He is an independent thinker who is strongly bonded to his family.