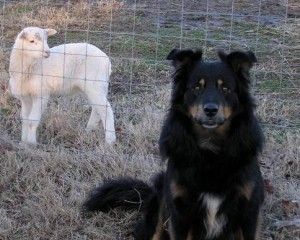 York has sheep and domestic rabbits and ducks. He varies his herding style to suit the situation, sometimes moving them with out letting them know he is doing it.

Sometimes York will grip the sheep on the neck. It is more of a “mouth guiding” rather that a true grip. Once he cut out a lamb for his master and shouldered and mouthed on the neck to direct the lamb so she could cut some tangled baling twine and plastic jugs from a back leg. When he reached his master, he forced the lamb down with paws on neck and held him, licking his face, while she cut the twine off the lamb.

He loves his lambs and works best with them and protects them. When his master’s 3 year old grandson was visiting, he consistently put himself between the boy and the horses in a neighboring pasture when the grandson walked up close to the fence and the horses approached.

York routinely hunts pests and eliminates them. He barks treed and stands on the tree.

A moderately energetic dog, York is opinionated but trainable. He will actively protect his masters from strangers if he perceives a threat.

York is a son of Kozar’s Molly PRN and a grandson of Sojourner’s Jacob PRGN.