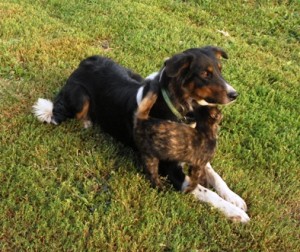 Maeve has worked ducks turkeys goats sheep and cattle.  Sheep are a breeze for her-they move wherever she wants them to go before she even gets near them.  Goats are difficult to herd but Maeve can get them to go where she wants and do what she wants.  Cattle are not worked as frequently but if we have animals that have gotten out of a pasture-she can herd them up, get them back in and stand guard until the fence is repaired.  She only works when needed and she walks right up to the stock and makes them move.  She always returns escapees to their proper pen and seldom barks but sometimes alerts to escapees.

When Goats have gotten out of pen and are not easily moved because they have gotten into a feed pan SHE will physically get on her back legs and lean over the goat(s) neck and push or pull in the direction she wants them to go.  Once the goat(s) are moving she will move to grip the hock to insure they keep moving. Maeve has never actually bitten any animal.

“When we first got HER, we had a border collie who would often hyper-focus on herding the ducks in our pond.  I mean this dog would swim around that pond herding ducks until I thought she would collapse from exhaustion.  I would then have to walk all the way down to the pond and stand on the bank and sternly order the BC out.  It did not take but a few weeks for HER to figure out that this was not acceptable behavior so she decided on her own that if I called and the BC did not respond, SHE would go and retrieve the BC – by her collar – and bring her out of the pond/field for me.  I was amazed as she was just a few months old when she started doing this.”

Maeve barks treed and hunts and eliminates pests and rodents.

A moderately energetic dog, Maeve listens to direction and is not easily discouraged.  She loves children and likes human visitors.  She will always bark her alert notice when anyone arrives at the farm but quiets immediately when told “its OK” or “Quiet,” there will not be another sound.

“What a wonderful work ethic! PRGN”