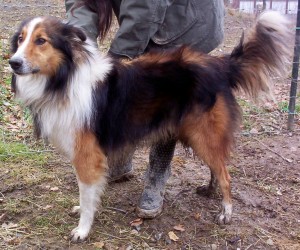 Diego works as goat herder and farm protector. He is an invaluable farm tool and family friend who sees his livestock as an extension of his human family whom he adores. He demands that the stock obeys his master’s commands. He works in an upright manner unless he needs to assert himself. He will crouch at the goat who doesn’t listen to him. Diego moves the goats using shouldering and will often give them the dominant stare to gain respect. He walks right up and they move. He sometimes grips the unruly goat on the hock.

He always treats the babies with care. He will not quit on the job. He is a natural gatherer who prefers to bring the stock to you. He barks often when herding and is always on the alert to return escapees to their proper place. He will attend children while they play and protect them from human intruders who he perceives as threatening.

He patrols his territory and barks an alarm appropriate to the situation. Diego is highly concerned with routine and will discipline those who break the rules. He is not concerned with vermin or squirrels. He will attempt to chase pests away rather than kill them.