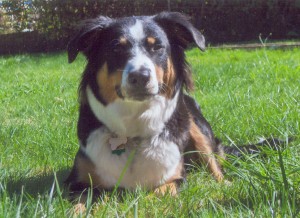 Nyssa is a fine dog who has a good bit of experience with sheep in a controlled herding environment where she has shown herself to be a dominance herder who bosses the stock into what she wants them to do. She has only gripped one time when a sheep was being unruly. She uses primarily dominance postures when herding but she will also give a dominant stare or occasionally crouch to make her point. She seldom barks.

Because she doesn’t live on a farm, there is limited knowledge of her guardian nature. However, she has gently protected a newborn baby bird from the cat. During a herding outing, a coyote came upon the perimeter near the stock. Nyssa put herself between the sheep and the coyote and stood growling and yipping, slowly advancing toward the coyote until he left. She is protective of her territory and will bark at visitors with the occasional growl.

Nyssa has treed prey, standing on the side of the tree barking periodically. She has attempted to kill an opossum but called off when her owner called. She is a busy girl when on duty, but is content to lay around when there is nothing for her to do. She is biddable in many ways but she is not afraid to let her opinion be known. If she feels she knows more than her owner, she will question your intent and then act with independent thought.