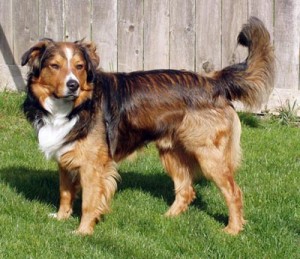 Boston is fiercely protective of his family when they are working with the horned Dexters.  He uses a variety of weapons to herd effectively.  He will gather or drive to suit the situation.  He’ll nip the hock or tail as needed in a closer situation.  If he cannot get a cow to move through the gate, he may get in front and entice her to chase him into the pen.  He uses a crouching position, uses eye, and also dominance postures to accomplish different tasks. He works close and seldom barks.

There is little need for guardian ability on his farm.  We don’t know a lot about his guardian ability, but when his cats were kittens he would play with them and share his food bowl and pillow with them.  Now he still shares but they don’t play anymore.  Boss is a moderately soft dog who takes instruction with little question.  He generally gets along with other dogs but is more tolerant off his territory.  He can be suspicious of unknown strangers but accepts them when his owners tell him to.