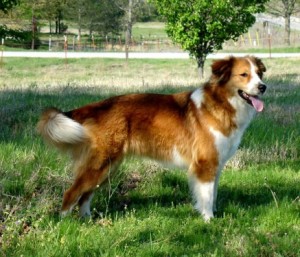 Shasta is protective of her territory and vigorously runs off stray dogs and varmints.  She is gentle with baby livestock.  She’s very serious about patrolling and defending her territory and spends a large part of every day and night doing so.

Shasta is absolutely death on varmints, she has killed possums and once killed a raccoon that was in the chicken house- she was not willing to give up despite getting her nose scratched pretty deeply and the utter tenacity of this creature.

She has never bitten anyone, but if someone who she doesn’t know tries to come in the gate she can be VERY aggressive, however once she is shown that the person is welcome then she will allow them in every time.

Shasta has many AWFA registered ancestors in her pedigree!