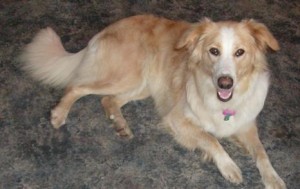 Nicky has worked goats, chickens and ducks. Does a good job with all. She will jump into the face of a goat attempting to butt or charge her and NIP at their snout. She heels, chasing after their hooves but rarely will nip there. It is mostly a lot of ‘poking’ hard with her snout, like ‘punches’.
Nicky sometimes jumps at the head when she, another dog, or I am threatened with an imminent attack. When I ask her to move stubborn stock and they won’t budge, she will also occasionally nip them in the face or go around and boss bark/charge at them from behind.

Nicky is protective toward children, small stock and her owner. She knows the limits of her territory. She maintains order, hunts rodents and keeps predators out of the territory.

Nicky loves to please. She is very sensitive to vocal tones and body language of her humans. She is more a submissive type dog in the pack order. Requires soft command/redirection only. If human voice is too harsh/loud and demanding, she will turn off.

She is not aggressive toward strangers.